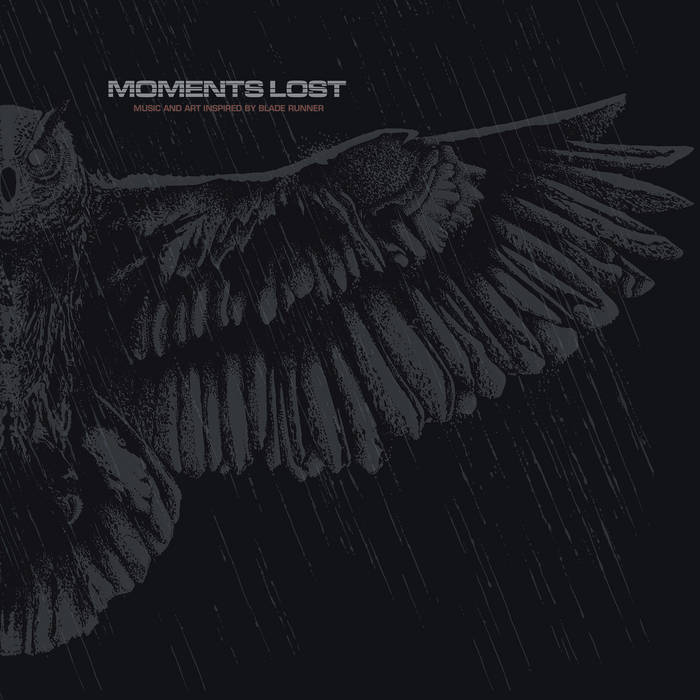 Death By Neon An awesome work of analog synth that perfectly feet to Vangelis' Blade Runner universe. One of the best tribute ever. I just wish this would be the original score to Blade Runner 2049 instead of what Zimmer / Wallfisch composed. Favorite track: The Escape.

Moments Lost is a cyberpunk love letter in the form of a concept album. Its goal is simple: to craft new works inspired by the world of Blade Runner. To this end, several musicians, illustrators, and a writer have joined together to create what is essentially a collaborative art project, which will mix up illustration, music, and short stories into one cohesive whole. "It feels to me that the world of LA 2019 lives on independently of the movie now," says one of the creators, Fredrik Segerfalk. "That's why we want to go there to look for new moments."

Peter Haighton December 31, 2014
From the blistering, nasal tone of the synthesizer to the wonderfully spooky melodies, and the authentic key changes, this album is many things: a faithful tribute to the original score, a wonderful salute to the masterpiece that is Blade Runner, and an epic musical adventure I'd liken with Tycho's "Dive" or deafheaven's "Sunbather" in terms of sheer musicality, tastefulness, and originality. Above all else, this is something I rarely label any music I enjoy as: Perfect. As a musician myself, all I can do is criticize my own abilities, and have an opinion on those of others, whether positive or negative. That said, very few pieces of music, let alone entire albums, are "perfect."

All in all this is a sensational, groundbreaking album, and I greatly anticipate more from Analog Sweden in this style. While this album would probably be best enjoyed by a Blade Runner/cyberpunk fan the most, and not by somebody who thrives in Top 40, this album is a great piece of work that many fans of deep, thought-provoking music can appreciate. I have listened to this album probably five or six times in a row now, it's that good.


Raymond Breau (2014-08-07)
THE MOST OUTSTANDING addition to the Blade Runner legacy E-V-E-R. the best motion picture soundtrack in the world has been repeatedly re-hashed, re-mixed, and even re-recorded in the past 32 years, but nothing even comes close to this version. it simply IS Vangelis' Blade Runner score issued from some parallel universe. these particular compositions have that extra little smidgeon of "ominosity" (MY word) and sadness that takes you just that much deeper into the post-modern dystopia that is the Blade Runner universe. once it starts, you hear that first exhilarating synth chord that sounds oh so familiar, BUT... it is immediately followed by a sudden, un-expected dive down derelict streets & alleyways, culminating in whole new experiences and situations, but ALWAYS accompanied by the omnipresent character of the original, with its towering buildings, smog-filled skies, and twinkling beacons. you are LITERALLY transported back to that world, and it is truly, once again, Los Angeles, November 2019. BRAVO! WELL DONE!


Marcus (2014-09-03) - Awesome - 5 av 5
This album is actually better than Vangelis original soundtrack. It has a wonderful atmosphere and brings back some lost moments.


‎Shawn Mika‎ 11 september 2014 ·
I received my Moments Lost CD and Art yesterday. I spent a few moments looking over all the pictures yesterday, and I'm listening to the CD right now. It's like I'm listening to never before heard tracks from Blade Runner. It really brings me back. Loving every minute of it. Really captured the essence of the original music in a new a fresh way. I'm really happy to have been able to support this. Thank you for such a wonderful experience.


Just to say a quick thank you for creating and publishing the Moments Lost tracks. I am and always have been a HUGE Blade Runner and fan and this continuation so faithfully produced is really mind blowing, especially when I thought I would never see anything new in this universe. The result is epic and all I can hope is that you may continue to produce music like this. Again, many thanks and congratulations on your hard work,


I must say the compositions and production are stunning.
Over the years Blade Runner influenced many from lone tracks to whole albums, the never ending bootleg editions, but none ever captured the magic like Lost Moments does, not even Vangelis' re-inspired set :)
Well done indeed, a big thank you.


The album was absolutely fantastic! Far exceeded my expectations. I hope to hear more from you folks in the future, I really mean it!


I am a very big fan of Blade Runner, so your album impressed me so much. This is a very worthy work, and Vangelis would be proud of it (did he hear about it or not yet?). Your album could be used in Blade Runner sequel that in production now, and I give you advice - ask creators about it. As for me, your music inspired some scenes for my science fiction literature project.
Thank you very much! I already want to hear your next album.

Bandcamp Daily  your guide to the world of Bandcamp